Nino Rota was a 20th century Italian composer well known for his film music. He wrote the music for over 150 movies, among which Francis Ford Coppola's The Godfather score that won an Oscar in 1974 for best soundtrack. 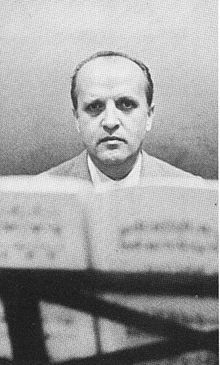 He composed music for the films by most of the important film directors of his time, including Fellini, Visconti, Zeffirelli.

Other titles of famous films for which he composed music are Death on the Nile, War and peace, La dolce vita, 8 1/2, The Leopard, Romeo and Juliet, Orchestra rehearsal, La strada.

Did you know? Rota composed also some works for viola, not very well known even to viola players. 2011 was the centenary of Nino Rota's birth, so it's time to get to know these viola works.

Nino Rota was born in Milan, on 3rd December 1911, then moved to Rome where he studied music. Very early Rota showed his musical talent as a composer and a conductor. Already at 11 he had composed an oratorio which was then performed. In his early 20s he won a scholarship to study composition at the Curtis Institute of Philadelphia.

Back in Italy, Rota obtained a degree in literature. Quite soon he started teaching and became director of Bari Conservatoire, from 1950 to his death in 1979 (he must have been really busy between teaching and composing all those films' music!).

Viola players and viola admirers can enjoy some really nice, very melodic works for viola and piano: Intermezzo, and two sonatas. Sonata n.1 in G major, was written in 1935, when Nino Rota was 23 and was dedicated to the virtuoso viola player William Primrose; it's in three movements: Allegro moderato, Adagio, Allegro.

All these works are for advanced players and a very pleasant way to advance too.

I hope you enjoy listening to these lovely works and if you are a player, do perform them! Click here or on the picture to buy Rota's viola sheet music and on the pictures below for recordings of Rota's music. 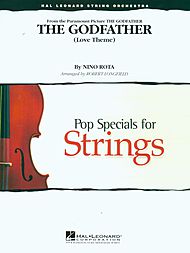 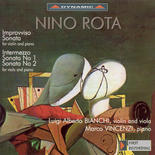