Viola Concertos from A to Z

or the Concerto form and the viola

Viola concertos? This is something unheard of to most people and even music lovers, unless they play the viola but, even in this case, few players know many of them. Yet, there are more than expected. Let's see what we can find out about the viola.

Origins of the Concerto

Manuscript of the first page of the Viola concerto in D major by Franz Anton Hoffmeister. He was also a publisher and friend of Mozart and Beethoven

The origin of the Italian word concerto is not certain, apparently it means to contend, dispute, fight and also work together.

Over the centuries, the term concerto has changed its meaning, indicating slightly different forms.

At the beginning, in the 16th century, it was used for a group of voices, in fact the word concerto was used for the first time in 1519 in Rome, Italy, to refer to an ensemble of voices getting together with music.

The first publication with this name of works for voices and instruments is by the Venetians Andrea and Giovanni Gabrieli, a collection of Concerti, dated 1587. Up to the first half of the 17th century, the term Concerti was used in Italy for vocal works accompanied by instruments, many publications appeared with this title. Initially also the word "sinfonia" was used instead of concerto.

Later, the word Concerto came to indicate a particular musical form, involving a larger group of performers forming a contrast with a smaller group of players or a solo instrument player, or various groups of players within the orchestra.

It was during this period (from mid 16th century) that the instruments of the so-called violin family (violin, viola, cello, double bass) were created and the most famous makers, such as Amati, Stradivari and Guarneri, lived. In many cases the instruments doubled the five-part voice ensembles, with two violins, two violas (alto and tenor) and bass. See also the history of the viola for more on this.


Meanwhile, this Italian musical form became known in Germany, so in 1619 the first works with this name appeared, by Schutz.

Towards the end of 1600 the instrumental concerto started to appear. This was generally a composition to be performed by a string orchestra.

Soon the composers started to write music exploiting the differences in players' skills, alternating the whole ensemble (ripieno or filling) to a smaller group of more skilled players (concertino). This is the Concerto grosso.


From the beginning of the 18th century the term concerto was used to indicate a composition for one solo instrument performing with orchestral accompaniment. Initially it was in four movements (slow, fast, slow, fast), then the Vivaldi-style, in three movements (fast, slow, fast), prevailed.

Virtuoso violinists started to write concertos for their own instrument, therefore we have many violin concertos as the violin had become the most prominent instrument.

The classicism concerto form was very clearly defined, similar to the sonata form:


This form has been used through the 20th century, together with other forms with a solo instrument accompanied by the orchestra.

Here I'll list the more significant works for viola with orchestra and those that are available in modern editions.

The list below already contains a quite large number of works but for those who want a complete list of (nearly) all works ever composed (even if never published), found, kept in libraries, out of print, they are in the catalogue "Literature für Viola" by Franz Zeyringer.

Of course, more and more concertos are being composed nowadays, so if you are a composer who wrote and published a concerto for viola or a player who knows about a published viola concerto and would like to see your viola concerto listed here, send me a message.

Click on the normal links in the following list if you want to buy the sheet music to play a concerto or click on the bold title to read more on that concerto.

With the term Baroque, music historians refer to a period that roughly goes from 1600 to 1750. The best known Baroque composers were Bach, Haendel, Telemann, Vivaldi, Corelli.

There are not many concertos for viola in the Baroque era. However, the first known viola concerto is a Baroque one, by Georg Phillip Telemann, read about it. Here they are:

There are two more "Baroque concertos for viola" which were actually written by the violist and composer Henry Casadesus at the end of the 19th century:


Anyway, they are nice additions to the viola repertoire of this period.

Considering the broader, original meaning of the term concerto, we can include also works featuring the viola in a solo (or concertante) role with other instruments. Such works are:

Classicism is a musical period quite well defined: conventionally it goes from about 1750 to mid 19th century, including composers such as Haydn, Mozart, Beethoven, Rolla.


Here too, we consider the broader meaning of the term concerto and include other works featuring the viola in a solo, concertante role with orchestra.
Among these, there is one of the most wonderful works ever written: Mozart Sinfonia Concertante for violin, viola and orchestra.

Romanticism was a literary and artistic movement started in Germany and flourished all over Europe from about 1820-30 for about a century. Musically, it was characterized by the rise of many virtuoso performers of nearly all instruments. The most famous, the personification of all virtuosos was Nicolò Paganini, maybe the most famous violin player, who played the viola too.

Other virtuosos were performers such as Chopin, Liszt for the piano, the double bass player Bottesini just to name a few.

From the Romantic era, there are no compositions that can be called real concertos for viola and orchestra. in fact, the violin was the undisputed protagonist of the musical scene, together with the piano. However, there are some very good works with the viola in a concertante role with orchestra.

From the beginning of 20th century many composers start to write more viola compositiones including concertos, especially thanks to viola champions Lionel Tertis first and William Primrose later. Thanks to them the viola has become accepted as a solo instrument at the same level of violin and cello and now it's normal for composers to write concertos for viola.

The two most famous ones are:

Other works with the viola in a concertante role with orchestra:

Go from Viola Concertos to the Home page 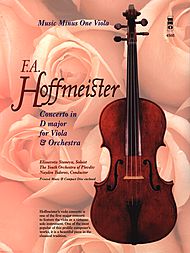 Play-along accompanied by your own orchestra

Concerto recordings without the soloist