For most of people who don’t know much more, Nicolò Paganini just means “violin”. He has come to be the personification of the instrument, the most famous violin player ever, during his life up to our times, thanks to his exceptional virtuoso playing and his personality. 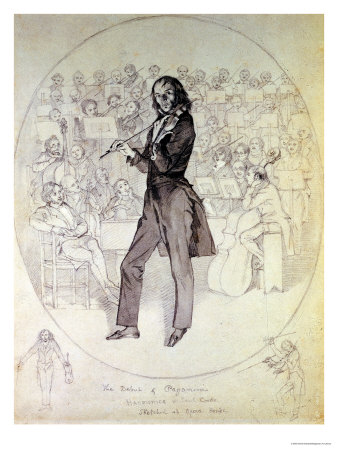 Very few know that, besides violin, Paganini played guitar and viola. He composed a lot of music with guitar for his friends, amateur players, and used to play with them.

These are the very interesting and original works for viola that Paganini wrote.

Although he did have some teachers, Nicolò Paganini developed his own very personal style and technique. One of his teachers was the virtuoso viola player and composer Alessandro Rolla who may have had some influence on Paganini's interest for the viola. Paganini was famous for his prodigious technique, leading some people to say he had done a pact with the devil, but in his time he was also greatly appreciated for his singing, cantabile tone, showing also a clear influence from the Italian opera style.

He was very interested in exploring the possibilities of producing new sounds and tone colours on the violin. He often used the scordatura, double harmonics and left hand pizzicato. In his concertos the strings in the orchestra often play pizzicato to accompany the solo violin (and the solo viola, too).

Nicolò Paganini was born 1782 in the republic of Genoa, in Italy, and started his musical studies with his father, a keen amateur, and then with the leader in the theatre orchestra. At twelve he had already given several concerts in local churches and composed the Carmagnola, as set of variations on a French revolutionary song.

He was advised to study with Alessandro Rolla, leader at the Ducale theatre in Parma, violin and viola virtuoso, who very likely made him aware of the possibilities of viola playing, and who had already been employing some of the new tricks that Paganini will use more extensively, such as left-hand pizzicato, chromatic ascending and descending scales, the use of very high positions on violin and viola, octave passages.

From 1801 to 1809 he was in Lucca, in Tuscany, giving several very well received concerts, although in one he was criticised for having played jokes in his performance, such as imitating cries of animals and other strange sounds. From 1805 he played in the orchestra there and composed several works, including the sonata Napoleone, for violin and orchestra to be played all on the G string tuned up to Bb.

From 1810 Paganini began his life as an independent solo concert performer. Till 1827 he did several tours of Italy, including Milan, Genoa, Venice, in Bologna met Rossini and they became friends. Paganini later wrote variations on Rossini’s arias from Tancredi, Mose and Cenerentola, conducted the premiere of one of his operas, with great success. Then Florence, Rome, Naples, Palermo.

In 1816 he completed the 1st violin concerto in Eb (again using the scordatura, with the violin tuned a semitone up), later transposed to D by successors. 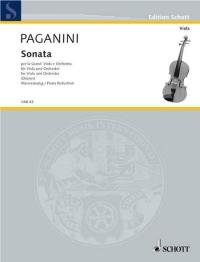 In 1820 the publisher Ricordi published the 24 Capricci (24 Caprices), dedicated to the professionals musicians (“alli artisti”), as opposed to many other works dedicated “alli amatori” (to the amateurs). Paganini’s 24 Caprices are a set of studies exploring different aspects of violin technique and at the same time works of great artistic value. Although they were not meant for public performance, they were immediately judged unplayable, but now they have become part of all violinists’ study and have even been transcribed for viola. They are much more difficult on the viola because of its size, yet the famous viola player William Primrose showed that it was possible to do it and even recorded some of them, which helped him a lot in his career. (...more about Primrose is coming soon...)

At the same time appeared six sonatas for violin and guitar, and six guitar quartets. Paganini composed nine more guitar quartets, in all of them the violin has the main part in contrast with the other three instruments having a darker tone. Quartet n.15 is an exception in that it is the viola which has the solo role, showing its gorgeous tone, especially in a beautiful Recitativo and Aria.
In 1824 Paganini met Antonia Bianchi from whom he had a son in 1825, Achille, who remained with him even after the separation from her. When Paganini met Berlioz, Achille was with his father and gave Berlioz that so much important letter and gift. In 1826 Paganini composed the 2nd violin concerto, in which the triangle in the last movement imitates the sound of a small bell. This movement was called later La campanella and became so popular that Paganini played it without the preceding movements.

From 1828 to 1830 Paganini toured Austria and Germany. Schubert was at one of his concerts in Vienna and said he had “heard an angel sing”. In Prague, he met Julius Schottky, who wrote the first biography of Paganini, published in 1830 (by the way, I'd really love to see a description of him by a contemporary, I love this sort of books. It's only in German, I wish I could read it. If you can and are interested, you can find it here for sale).

Between 1829 and 1830 in Germany Paganini gave more than 100 concerts in 40 towns. There he met Spohr, Hummel, Schumann and his wife Clara and Goethe. Even though he was so busy with concerts and travelling, he managed to compose his 4th violin concerto and two more sets of variations. Paganini wrote many sets of variations. They were the perfect way to display the endless musical and technical possibilities of the violin, thanks to his imagination and skills. In the variations on God save the king, Paganini uses a lot of left hand pizzicato, something quite unheard of.

In 1831 Nicolò Paganini gave his first concert in Paris. It was a great event, despite the ticket prices were doubled the theatre was full. I think it was a shame that Berlioz missed it, he was in Italy at that time. Later he went to London, toured Ireland, Scotland and then went back to Paris. He wrote his friend Germi that in one year he had given 151 concerts and travelled 5000 miles (in those times, by coach!).

Both in Paris and London the reactions were the same, all the press praised him as the “finest player ever existed”.

Between 1832 and 1834 Paganini became interested in the viola as a solo instrument. In a private concert in London he played a Terzetto for viola, cello and guitar (Mendelssohn played the guitar part on the piano).

While in Paris, in 1833 Paganini heard Berlioz’s Fantastic Symphony at a concert and congratulated Berlioz about it. Some weeks after this concert Paganini told Berlioz about a big Stradivari viola he had and asked Berlioz to write a concerto for him to play this viola. This was the origin of Harold in Italy. When the first movement was complete Paganini wanted to see it. He was a bit disappointed because, noticed that there were too many rests. Paganini didn’t like it and never played it, although a few years later, in 1838, he heard it in a concert conducted by Berlioz and loved it. He was so impressed by it, he said, never as touched as by Harold, that sent Berlioz a letter saying “My dear friend, Beethoven being dead only Berlioz could make him live again...”, including a cheque for 20,000 francs!

Wishing to play his Stradivari and having refused Berlioz’s work, Paganini had to write one himself. This led to the composition of the Sonata per la Grand’Viola and orchestra, another work where Paganini again makes use of a Reecitativo and a set of variations to display all his exceptional qualities, exploring the whole tonal range and applying on the viola the same virtuoso technique that had made him famous.

His performance in London in 1834 was received with appreciation for his playing but reserves about the viola as a solo instrument (they were not yet ready for it...).

Most of his works for violin and orchestra were never published in his life and some are lost because he thought he was the only one who could play them. Also another reason was the lack of copyright: a composer could either sell his works to a publisher (after which anybody else could have copied or performed them), or play them himself and make money out of it. Anyway, it has been worked out that Paganini in one year earned so much that he could have bought 300 kilos of gold.

In the last years of his life Paganini had some misadventures that made his life bitter. In London he had fallen in love with the daughter of his pianist and wanted to marry her secretly in Paris. There was a scandal, reported on the press both in France and England and Paganini had to spend long time writing letters to newspapers to defend himself. This was not the first one of his troubled love stories. Earlier in Parma he had been living with a young girl whose father then charged him with abduction, which caused Paganini to spend some days in prison.


He went back to Italy, conducting the orchestra in Parma with Beethoven’s Fidelio but there were disagreements about his plans to reorganise the orchestra.

Again in Paris, he was involved in the creation of a new music establishment, Casino Paganini, where he was supposed to give concerts twice a week. Because of his bad health he wasn’t able to fulfill his commitment and the casino failed. After losing a proceeding for breach of contract he had to pay a large sum.

In Nice, which was part of Italy at that time, he became a dealer in musical instruments and invested large sums buying them. When his health worsened, his son called a priest but Paganini sent him away, the last incident of his unconventional character. The bishop charged him with impiety and forbade a religious funeral. He died in Nice in 1840, and there one day, by accident, I found this plaque that commemorates him. 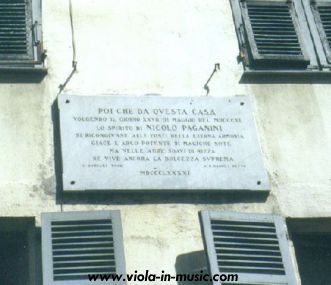 SINCE FROM THIS HOUSE
ON THE 27TH OF MAY 1840
THE SPIRIT OF NICOLÒ PAGANINI
REJOINED THE SOURCES OF THE ETERNAL HARMONY
THE BOW, CAPABLE OF MAGICAL NOTES, LIES
BUT IN THE GENTLE BREEZES OF NICE
STILL LIVES ITS SUPREME SWEETNESS


Go back from Nicolò Paganini to Famous violin players

Viola-in-music.com is recommended by the Encyclopaedia Britannica in its External Websites section