Several years ago I found in a music shop in Amsterdam a second hand LP (they were already outdated items) of it performed by William Primrose (read about him here) conducted by Walton himself and I bought it immediately, together with other old LPs. I had never heard any of Primrose's recording, I knew him only by name. I also had only heard that concerto played by schoolmates, never understanding it. As soon as I listened to Primrose recording, I understood the concerto and fell in love with Primrose and Walton viola concerto which you are hearing.

Sir William Walton is one of the main English composers. He was born in on 29 March 1902 in England, near Manchester into a modest family. His parents were both musicians, a baritone and a contralto. Soon he showed good musical faculties singing in his father’s choir and at only ten won a scholarship to sing in the choir at Christ Church Cathedral, in Oxford, at which school he remained for six years. There he received musical instruction as a singer and also learned to play piano and violin. He also received encouragement for his early composition works and financial support. Walton entered Oxford University at 16.

At the university library Walton had the opportunity to study the works of Debussy, Ravel, Prokofiev and Stravinsky. He left at 18 without a degree and went to live in London, "adopted" by the Sitwell family friends of him, with whom lived for about ten years. Thanks to them, Walton enjoyed financial freedom that enabled him to compose, and a lively cultural environment. During this time he attended the Russian ballet, met Stravinsky and Gershwin, listened to jazz music and for the first time travelled to Italy, a very important experience for him.

Some compositions from this time are Façade, on a poem by Edith Sitwell, the Sinfonia concertante and Belshazzar's Feast. The viola concerto was composed in 1928-29 and its composer, therefore, was only twenty-six. This composition brought him more notoriety.

From the 1930s he composed also music for films, patriotic ones during World War II, the First Symphony, the violin concerto for Heifetz. Other important compositions are two Coronation Marches, one for King George VI and one for Queen Elizabeth II.

Walton was an English man who loved the sun and character of Latin countries. While travelling for a conference in Argentina he met the 24 years younger Argentinian woman who'd become his wife. They married two months later, in 1948, and then went to live in Italy, on the island of Ischia, near Naples, where, over the years, the Waltons built a luxurious villa with a marvellous garden.

After hard work, in 1954 the opera Troilus and Cressida was completed. It was successful in London and USA but not as well received in Italy. The composer's self confidence was weakened by this. Walton composed less, also because of health problems, but continued to travel to conduct his own works, visiting also Australia, New Zealand and Russia.

Other major works are the cello concerto, written for Piatigorski in 1956 and the Second Symphony.

During his life Walton received several awards for his work, including an honorary degree from Oxford University, and the knighthood (hence his title Sir) and the Order of Merit from the Queen. He died in 1983 in Ischia.

As Lionel Tertis tells in his My viola and I, it was the conductor Thomas Beecham who suggested Walton to compose a viola concerto for him (Tertis). So we have to be grateful to all these musicians if we can enjoy this awesome work. Tertis also refers, "with shame and contrition", that when Walton approached him offering the first performance, he declined it. Tertis always regretted this, he says he wasn't well but also admits that at that time he wasn't yet able to appreciate Walton's music. Walton asked Tertis to suggest someone else for the performance and Tertis suggested Paul Hindemith, so he was the one who premiered it, in London in 1929.

Walton revised his viola concerto in 1962, changing the orchestration into a lighter one: instead of 3 instruments for each of the winds sections, he employed two, eliminated the tuba and added a harp. However he authorized both versions for performance.

The first movement is opened by the orchestra playing only three bars of a sort of introduction to the viola that starts immediately after that with a melancholic theme, tense, characterised by large intervals, in the middle-high register of the viola. The theme is taken twice by the oboe, with the viola accompanying; then the viola repeats the theme in the even higher register of the instrument.

Then there is a bit more animation and a series of viola chords that lead to another theme. This is also melancholic but it's calmer, in the lowest register, without large intervals, at 2:04 in the video. Little by little the viola climbs its registers with this theme, then starting a very rhythmic and fast paced episode. At 3:07 we can hear again the beginning of the theme, this time with strong rhythm and fast, played by the orchestra and then by the viola. At 3:21 starts a long passage which is an elaboration of the theme. The initial theme is nearly always present in some form (slow, fast, melodic, rhythmic, in the solo or orchestral or other instrument part). Again, later at 3.55 the viola plays a melancholic theme, with several chords.
At 5:42 the viola and the orchestra swap their roles: the viola plays what the orchestra played at the movement opening, followed by the oboe (then the flute and the whole orchestra) performing the initial theme with the viola doing a lot of runs, scales, trills. All this ends at 6:30 with the viola presenting the theme we heard at 3:55 in a major key, this time with a completely different character, the same melancholic mood of the beginning.

For the second movement of Walton viola concerto I chose the following video. Although the opening is missing, unfortunately, I like it because, besides being a superb performance by Peter Schidlof of the Amadeus quartet, it's a live performance, which I prefer.

This movement is very different from the previous one, it's the opposite. This is short, very energetic, playful, with a strong rhythm theme announced by the viola. Here the viola and the orchestra chase each other all the time, playing the theme in turn, with no rest. The viola makes use of harmonics in several places, adding a touch of special sonority to the piece.

The third movement is from a recording by Yuri Bashmet; also the following "video" is incomplete, but you can listen to most of it. It is opened by the bassoon, announcing a theme that sounds a bit circumspect, repeated and enlarged by the viola and then by the orchestra.

At 00:45 a new musical idea, hesitating, pressing, is introduced by the violins and taken up by the viola. This leads to a melodic, and melancholic theme (at 1:14) similar in character to the concerto beginning. This theme has a rich sonority thanks to the chordal writing. After a while of this idyllic atmosphere, at 2:04 the music goes back to the initial mood; the viola proposes the first theme again, varying it, with the orchestra further elaborating it. At 3:00 the viola has another singing melody while fragments of the previous musical ideas can be heard in the background, played by the bassoon and by the violins. From this orchestral background, a clarinet emerges with a scale (3:23) and picks the melodic line the viola had been playing. Now the viola accompanies it playing ascending and descending scales, trills, in the same way this occurred in the first movement.

At 3:50 we are back to the first theme played by the orchestra and to the pressing idea at 4:14, picked up by the unaccompanied viola. Then all previous thematic material is developed in turn by the viola and the orchestra.

This final part sounds to me like somebody (the solo viola) dying and reviewing all the important episodes of one's life, sad because it's nearing termination.

It is a recapitulation of most of the concerto thematic material. You can hear the solo viola feebly stating the first movement initial theme, followed by the closing phrase of the same movement, ending on a very long, high note, possibly the highest note of the viola.
There is less and less energy left, then the viola plays just the beginning of the 3rd movement theme, much slower, and the following idea.

The last five bars are but a memory of the initial part of the concerto opening theme, played by the viola in its low register, ending with long chords, the last breath, soft, in dissonance with the orchestra's plucked notes, giving a feeling of uncertainty.

However, if you prefer more recent recordings of Walton viola concerto, you can find many more CDs and digital versions.

Recordings: which are best?

Maxim Vengerov
too plays the viola! 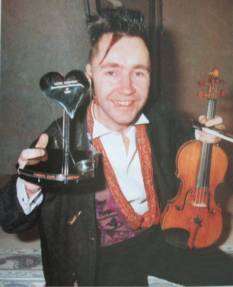