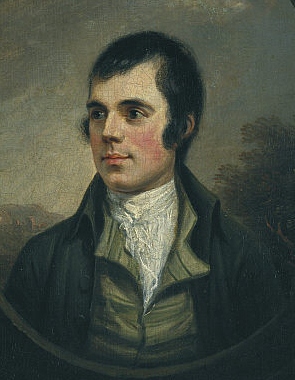 Robert Burns is the most important Scottish poet, born on 25 January 1759, three years after and two days before Mozart. Scots everywhere celebrate this day, with a Burns supper with haggis, whisky, kilts, poems, bagpipes, music and dance.

Besides writing his own poems, Burns worked to collect Scottish folk songs, in many cases he wrote poems set to traditional tunes.

Even Google in UK time ago celebrated his birthday with a special logo with a few words from the poem My love is like a red, red rose.

So, what does Robert Burns have to do with the viola? Well, simply there are a few songs based on poems he wrote that I like playing on the viola, they sound really gorgeous. So, being his birthday, I want to share with you the transcriptions I've done for viola of two songs based on Burns poems, together with two other popular Scottish song.

Here are the poems:

Here is a song by Robert Burns in one of his more soulful moods as he describes a love-lost girl as she wanders by the banks of the river Doon in Ayrshire.
I like to play it followed by The Skye Boat Song, they form a nice set.

Aft hae I rov'd by bonnie Doon
To see the rose and woodbine twine;
And ilka bird sang o' its luve,
And fondly sae did I o' mine;
Wi' lightsome heart I pu'd a rose,
Fu' sweet upon its thorny tree!
And my fause luver stole my rose -
But, ah! he left the thorn wi' me.

This Scottish folk song is about the escape of Bonnie Prince Charlie, over the sea to Skye, after his defeat at Culloden in 1746. Prince Charles Edward Stuart (1720-1788), commonly known as Bonnie Prince Charlie or The Young Pretender, was the pretender to the thrones of England, Scotland, and Ireland. The author of this song's music, often used as a lullaby, is unknown.

I like to play it after Ye banks and Braes, they form a nice set.

Loud the wind howls, loud the waves roar,
Thunderclaps rend the air
Baffled our foes, stand by the shore
Follow they will not dare

Many's the lad fought on that day
Well the claymore did wield
When the night came, silently lain
Dead on Culloden field

Though the waves heave, soft will ye sleep
Ocean's a royal bed
Rocked in the deep, Flora will keep
Watch by your weary head

Burned are our homes, exile and death
Scatter the loyal men
Yet e'er the sword cool in the sheath
Charlie will come again.

My Bonnie Lies Over The Ocean

This song on another of Robert Burns's poems is a very well known in many countries, especially in the English-speaking world. People use to sing it during new year's eve parties at midnight.

It is about friendship and a reminder that old friends should not be forgotten. Therefore it's also sung as a farewell song at the end of gatherings, funerals, someone's departure.

I've been a scout for many years and that's how I first heard it and sung it.

And, last but not least, maybe the most popular love song by Robert Burns. Actually, it's very likely that Robert Burns didn't compose it himself but drew inspiration from an existing old Scottish song. Anyway, enjoy it in these videos, the viola version and the song and then, if you are a player, get the sheet music below and enjoy playing it, like a song.

O, my luve is like a red, red rose,
That's newly sprung in June:
O, my love is like the melodie,
That's sweetly play'd in tune.

As fair art thou, my bonnie lass,
So deep in luve am I
And I will luve thee still, my dear,
Till a' the seas gang dry.

Till a' the seas gang dry, my dear,
And the rocks melt wi' the sun!
And I will luve thee still, my dear,
While the sands o' life shall run.

And here is the music

Only for a very short time, here is my Robert Burns birthday gift for you: Download FREE my transcriptions of Scottish and Robert Burns songs

Ye Banks and Braes
My Love is Like a Red, Red Rose