David Oistrakh is another famous violin player who played the viola too, this way showing appreciation for the instrument and helping it to get better known.

Oistrakh was born in 1908 in Ukraina and died in Amsterdam in 1974. He studied from five until his graduation in 1926 at the Odessa State Conservatory, playing both violin and viola. In 1927 Glazunov invited him to play his concerto under him in Kiev. 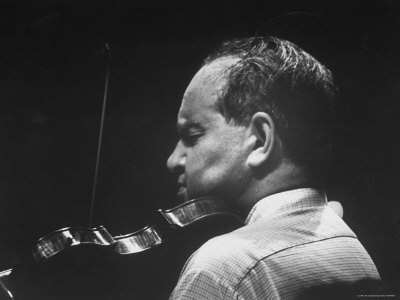 Oistrakh made his début in Leningrad in 1928, and in Moscow the following year. During the 1930s he won several prizes: first prize in the Ukrainian Contest (1930) and the All-Soviet Contest (1935); second prize in the Wieniawski Contest (1935; the first prize was won by Ginette Neveu); and first prize in the Concours Eugène Ysaÿe in Brussels in 1937. This was the beginning of his international career; but during the war he played at the front, in besieged Leningrad, in hospitals and factories. The performance of Bach’s Double Concerto in 1945 in Moscow with Menuhin (the first foreign artist to visit the Soviet Union after the war) was memorable. In 1946–7 Oistrakh gave a cycle of five programmes, ‘The Development of the Violin Concerto’, which included the concertos of Sibelius, Elgar and Walton, as well as Khachaturian’s, dedicated to him. At his New York début in 1955 he introduced Shostakovich’s First Concerto, written for him.

From 1934 he taught at the Moscow Conservatory; among his students were his son Igor. He was named People’s Artist of the USSR in 1954 and received the Lenin Prize in 1960; he was also honoured by the Royal Academy of Music, London, and the Conservatorio di Santa Cecilia, Rome. He edited violin works and arranged Prokofiev’s Flute Sonata with the composer’s approval. His hobby was chess, and in 1937 he played a match against Prokofiev.

Oistrakh was considered among the greatest violinists of his days, and the most characteristic representative of the Russian school.

His technical mastery was complete, with a warm and powerful tone. His was willing to perform new music and many Soviet composers dedicated works to him (Prokofiev, Shostakovich, Myaskovsky, Khachaturian, Rakov, Weinberg). David Oistrakh was also known as a gifted conductor and viola player.

I first heard Oistrakh in a recording of Mozart’s Sinfonia Concertante for violin, viola and orchestra, with Rudolph Barshai playing viola. Here you can see him perform the same work playing the viola, while his son Igor plays the violin.

In these three exceptional videos you can listen to the whole work. The conductor here is another famous violin player who also played viola sometimes, Yehudi Menuhin.

I hope you enjoy this performance as I do and if you want to know more about this wonderful work, read a description of Mozart’s Sinfonia Concertante here

Find what you are looking for, use this search box

Go back from David Oistrakh to Famous violin players